A few days back the BBC wildlife magazine announced their wildlife power list which consists of Britain’s top 50 conservationist. If you subscribe to the magazine you would of got your copy a few days ago but for those who don’t subscribe you can buy your own copy from the shops tomorrow.

I feel very pleased and honoured to appear on the list, number 48, as there are some well deserving individuals which I admire considerably on there. Whilst reading through I straight away thought some were a great choice, some could have been listed higher up and I could think of probably another 50 people to feature on the list too! Obviously it’s not just myself who has an opinion on the list, on social media pages its been causing quite a stir and has been very controversial. I know from what they have tweeted, the BBC Wildlife Magazine have received a lot of comments about it too.

Everyone on the list is very worthy to be there in my opinion. Every one has made a great impact to the environment in different ways and will undoubtedly go on and do so in years to come. It was great to see some fellow young people listed too, these were Findlay Wilde and Jack McGowen-Lowe. It was also a good idea to have a mixture of people on there, from broadcasters and scientists to MPs and artists.

One thing that did disappoint me was the amount of women on their compared to men. There was 14 girls on the list compared to 36 male which is quite a big difference!

Never the less I think the list will really inspire those who read it! 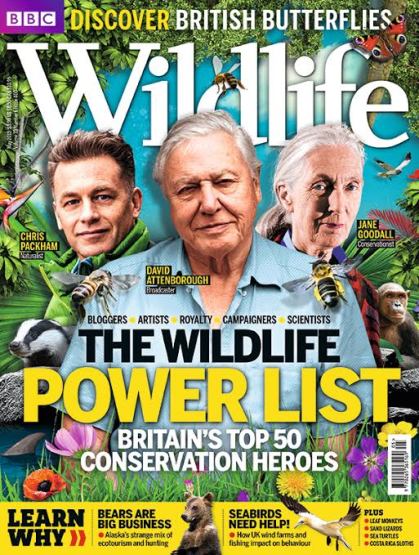 I would also like to say that on this Wednesday evening, 13th, I will be appearing on a documentary called the Great British Garden Watch. It will be on at 9pm on BBC 2 and should be a great hour! It will also be including a few other wildlife nuts like Findlay Wilde, and his younger brother Harley, and the wildlife gadget man, Jason Alexander.

You can read more about it here – http://www.bbc.co.uk/programmes/b05vmxn2