Throughout the time I had off during the summer, one of the things I decided to do to keep myself busy even more was volunteer at a nearby RSPB nature reserve, Sandwell Valley. Then once the summer was over, I kept in touch and last week I went along for the day to help out.

RSPB Sandwell is a superb reserve and whilst volunteering there last week I was given the task to do a write up for their blog about what it’s like during the Autumn and what the reserve’s like from my perspective as a volunteer. For this I tried something out, a bit more of a ‘creative’ writing style compared to normal so I’ve decided to share it on my blog too.

A Search for Autumn at RSPB Sandwell

Last night left dew on the grass which continued through to this morning with a drizzly start. As the clouds parted and it began to dry up, a damp undertone was left along with a somewhat chilly feel, but not as much as you’d expect for this time of the year.

However this had no effect and wasn’t to stop it being a delightful walk on the reserve. When stepping out your left ear drum is hit by the sound coming from the feeding station which stands just metres away. Happily getting on was the usual great tits and blue tits before a swarm of greenfinches and chiming goldfinches battled in. The amount of space on the feeders was limited with the numbers that had arrived. Birds caught in mid-air and frantically moving their wings. A scene which was quite different compared to the summer when I saw it thriving with the bright pink colours of the bullfinches. Below the table and feeders, were the usual suspects including the odd pigeon and of course a squirrel stumbling in.

In the distance, further down the reserve, you can see the lake where white blobs float and beckon you. As I make my way down to the hide to see what other birds I can discover down by the lake, the path takes me down through colourful woodlands and paths which weave and show of views of the valley.

Whilst listening carefully I could hear the distant traffic but this did not last for long as a robin right above me bellowed its heart out, enough to blur out any traffic sounds. Looking further down, to the greenery at my level and there’s a host of berries, including the distinctive late autumn crop of rose hip as well as sloes. Some of which have just been feasted on by the blackbird which bolted out.

Looking to the ground and how can we give the autumn treasure of fungi a miss. Whilst I kneel down, I investigate the scattering of dead bark. A common type I came across was turkey tail.  On closer examination it’s pretty obvious why it has this name. While the upper surface comprises of centric zones of red, yellow, green, blue, brown, black and white, the underside, which is covered in tiny shallow pores, is white.

Whilst still in the search of other fungi species I come across a sign saying ‘mini beast hunting’ however something tells me it’s rather quiet at the moment, not many of the smaller kind around! Nevertheless, I stumbled across a hedgehog house. A very important house, perhaps there’s a little fellow fast asleep in there right now. Enjoying the peace and quiet as the cold weather starts to kick in! There’s no doubt that RSPB Sandwell Valley is truly giving nature a home.

Further down the path and you’re presented with a view which could only match to that of an artist’s painting. With what looks like a hundred different colours, all different tones of orange, red, yellow, green and even some pink. On the path before me I’m taken through an arch with a floor of similar colours and tones. After a wet night, the smell is very distinctive. The smell of wet leaves seems to have some sort of ring about it, definitely a key smell of autumn. With the gentle breeze, more shapes, patterns, colours and tones are added.

Before entering the hide I’m rung deaf by a volery of long tailed tits, all squabbling in the tree above but a delightful sound.  Once sat in the hide I’m not only greeted by the regular bird watchers here but also some of the usual bird suspects. I’m also told about the morning’s sightings of a pintail which was part way through maulting, wigeon, shoveler, snipe and the kingfisher from earlier which gave a display which can only be classed as showing off! As I look out from the hide, in front of me stands six cormorants balanced on one of the platforms. One of which was bathing itself in the mid morning mist and making the occasional rattling call. I also spotted a few goosanders, some to early to identify as either male or female. However those in the hide did get some good sites as one flew right over to go and sit opposite on one of the platforms, mixed in with the gulls. I also managed to see a shoveler out  on the lake, with the startling white colouration on its body as well as plenty of teal. 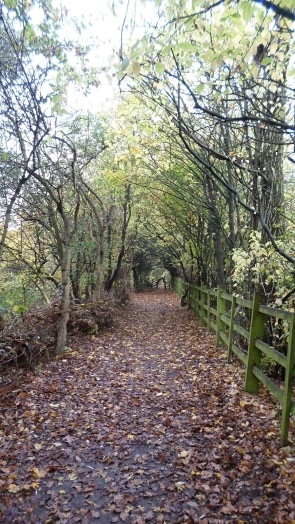 As the drizzle begins again another squabble occurs within the group of gulls and a couple of lapwing hop around the island. On my way back up to the visitor centre, the rain clears away once more and the rich, golden autumnal landscape continues to glow.

One thought on “Volunteering adventures”