COP25 is underway in Madrid. It’s the last gathering of the COP group before the Paris Agreement comes into effect next year. Hearing and reading about it on social media and in the news has encouraged me to write a blog, like the one I wrote in 2015 on COP21.

COP21 took place in Paris and was where the Paris agreement was formed. Although it doesn’t reach the level of action needed to tackle climate change, it exceeds other talks on tackling climate change of this time. Back in 2015, when I had just started my A-Levels, I remember reading about this and getting involved via social media and writing a blog. I also joined 50,000 others on a climate march in London. Such events took place across the UK and the world as they watched the proceedings of COP21. At the time, it was the largest march that I’d attended, and I remember it fondly, which is evident from the blog I wrote.

For me, on a personal level, there in London, it was just mind-blowing. I joined around 50,000 others in the streets of London as we marched through giving out a strong message of how we not only care about the future of this planet but want it to be a safe and sustainable place for everything which lives on it. Now, along with in many, many years to come. All through my body, I felt hope. The smile on my face was beaming as I was surrounded by so many passionate people who are fighting for what they believe in. That’s the thing with climate change, everyone has different stories and reasons why they’re so provoked to act. – A day to remember 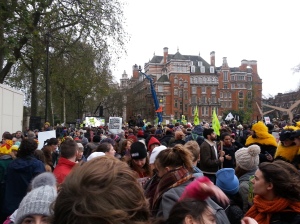 It was an overwhelming day! I also wrote in context to the volume of people attending and how ‘this can’t be ignored’. Evidently, I was quite naïve at the time. But, since, the protesting and people power continues in its masses. Just since COP21, we have seen a surge of young people and school climate strikes, and a definite change in public perception. When I attended this event, it was hard to find others from school who wanted to attend, but how things have changed.

The fight grows and as stated by United Nations Secretary-General Antonio Guterres last week, this summit marks the “point of no return” in our fight against climate change. We’re all too aware of figures reporting temperature rising, sea level rising, melting sea ice and its inflicting consequences. We don’t need to be reminded how 2019 is on course to be among the top three warmest years on record. But I believe perhaps things are being taken more seriously here in the UK with ‘climate emergencies’ being announced across local councils, the British Government, large organisations, universities and so on but as we’ve asked all along, how far will this get us.

That’s the thing with climate change, everyone has different stories and reasons why they’re so provoked to act. – A day to remember

I like this line from my blog on COP21, it hits the spot. Young people reacting and acting are putting their education on the line, proving that disasters caused by climate change are going to affect their lives much more than their education. This receives mainly positive responses, including from those in power. It’s more than positive responses we need though. These strikes, event and fights are action, not showing we care. We do care but caring isn’t enough when it comes to climate change. It’s going to be very interesting looking back at this time in years to come.

Of course, it’s not just young people, those of all ages and backgrounds are making their stand. It’s become a big part of the upcoming general election. Most party leaders know that’s what the public will be considering when they vote.

Anyway, my first blog in a while but hopefully not the last. As Greta Thunberg recently said: “People are underestimating the force of angry kids.”