After collecting my trail camera I was thrilled to see that not only had I filmed the adult badgers but I had also filmed badger cubs for the first time this year! I set my camera up near the sett last Saturday and there was no sign of cubs so this was obviously one of the first times they had emerged from the sett. I was thrilled with the footage, It was fantastic to see the natural behaviour of badger cubs exiting the sett for one of the first times. I filmed a variety of activity from cubs playing, the adults having a good scratch and one of the adults dragging one of the cubs back in to the sett by the scruff of its neck. Here’s one of the clips, I’ll be doing a blog post with more later on in the week.

I didn’t have that much time to look through as I had a long journey ahead of me to the Badger Trust Seminar in Bristol. As I was eager to go and my parents were working I managed to get a lift from a member of the South Derbyshire Badger Group which was great and I was so pleased I went! There was a prompt start at 11 for the AGM then after lunch the afternoon of debates began.

The first debate was on the badger cull. Sat on the panel was Professor John Bourne, the Chairman of Independent Scientific Group, Roger Blowey, Livestock Vet, John Blackwell, President of British Veterinary Association and Mark Jones, Vet and Wildlife Protection Campaigner. As you can see, from the variation of panel members, it was very interesting and resulted in a fantastic debate with a mixture of discussion from the panel and comments from the audience. This debate was very important as it’s not very often you get people like this together. Before comments from the floor the members of the panel introduced themselves and give a small introduction then Dominic Dyer, Badger Trust CEO, asked them a question on what they had said.

However before long this got a bit out of hand and the debate became very intense. For me it was a great experience and to hear so many people express their opinion in such a strong way, against the cull, was truly inspiring. Also the fact that they weren’t afraid to speak out against those on the panel which are in favour of the cull.

The first to speak was John Blackwell, President of British Veterinary Association. This was interesting as the British Veterinary Association had released their statement on the badger cull just a few days before the Seminar. In the statement they had made a U-turn from their original idea which was culling free running badgers was the way to go. Instead, in their latest statement, they stated that the pilot culls should continue but badgers should be caught in cages before shot as they believe it’s a ‘humane and effective’ way.

This was then followed by Roger Blowey, a recently retired Livestock Vet and author of report on the possible impact of culling lowering TB rates in cattle. I’ve read comments from him in many articles stating the fact that he believes ‘the culling of badgers in the county is the only reason why farmers are now testing negative for bovine TB for the first time in a decade’. Roger Blowey made many more comments and suggestions like this one throughout his introduction and in the debate.

Without a doubt, this fired the debate up. Many people in the audience got involved which was timed nicely with the great introduction from Professor John Bourne. It was obvious he knew what he was talking about as he destroyed any scientific, economic or animal welfare justification for the current badger cull policy. He went into great detail, along with giving examples from other countries, that the negligence and deceit within the Government, Farming and Veterinary Industry has led to the demonisation of badgers for spreading bTB when all the evidence points to poor bTb testing and cattle controls as a key factor for the increase in Btb. He also stated how millions of pounds has been wasted, wildlife destroyed and how farmers and tax payers have been let down by a disastrous bTb reduction policy which has focused on badgers far too much.

The last one to speak was Mark Jones who is a vet and wildlife protection campaigner. His introduction went through different reasons why the cull isn’t and won’t work. He presented his points in a very organised way and put his points across clearly. He also made the very valid points on how badger persecution is rising which is no doubt related to the badger cull.

Overall it was an extremely interesting and tense afternoon, I was very pleased to be there. Obviously, as you all know, I’m against the cull, full stop. So being there during the debate was a fantastic experience. The atmosphere was incredible and I felt privileged to be surrounded by people that care so passionately. Going to an event like this makes me realise, more so, why I am against the cull and makes me more determined to help do my bit to rule it out and resort to other ways to reduce bTb. 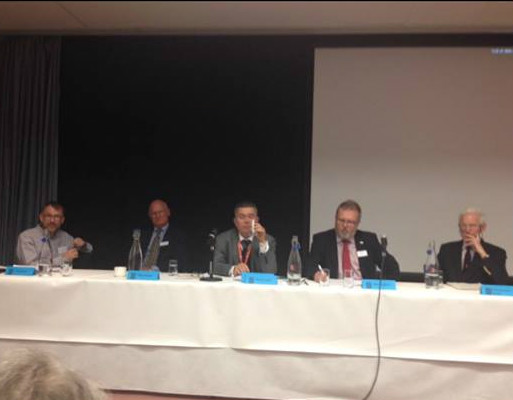 The afternoon didn’t stop there though as there was another debate which was on wildlife crime. I must say, this debate wasn’t as intense but it was still very interesting. The panel was chaired by the new Badger Trust chairman, Peter Martin, and on the panel was Charlie Moores, Birders Against Wildlife Crime, Tom Quinn, Director of Campaigns at League Against Cruel Sports, Pauline Kidner, Founder of Secret World Wildlife Rescue and Lee Bainbridge who is the wildlife Crime Officer from the area.

Starting it off was Charlie Moores who is the Chair of Birders Against Wildlife Crime. He gave a summary about what BAWC is about, his views on wildlife crime and tackling wildlife crime. Birders Against Wildlife Crime is a campaign group which was set up last year by a group of experienced birders and conservationists who are sick of the number of crimes being committed against wildlife. I went along to BAWC’s first conference a few weeks back which was a fantastic day and you can read more about it by clicking here.

Before the audience could ask questions there was one more talk which was from the Founder of Secret World Wildlife Rescue, Pauline Kidner. She spoke about the increase of injured badgers which is linked to the cull, wildlife traps and snares and reporting and recording wildlife crime. Another thing she spoke about was something that she believes is important that we need to do to help tackle wildlife crime and that is by starting with educating the youth. I was pleased she brought this up as it’s a subject which is also very important to me.

When I go to school I’m surrounded by young people that have no idea about the ongoings in our countryside. This is partly to do with things like technology which have taken over. If young children aren’t able to go out and engage with the outdoors from a young age and learn about it when they grow up then how are they supposed to be able to report wildlife crime, help protect species and habitats, and most of all put their opinion across on what they think should be going on in the countryside and to our wildlife, without being brainwashed.

This debate was different to the one on the badger cull as everyone on the panel had mutual feelings. However there was a lot of discussion about the problems with reporting wildlife crimes and how it isn’t being taken seriously enough. There was also a discussion about fox hunting and the illegal on goings which aren’t dealt with.

After a fantastic day it was finished perfectly with a talk from the actor and animal ambassador, Peter Egan. He gave his comment from the discussions which had gone on and read out a very inspirational poem about Moon Bears.