I thought it would only be right to do a follow up blog post after Saturdays peregrine watch at Lichfield Cathedral.

For the best part of a year now I’ve thought about planning some sort of event celebrating these wonderful birds, my favourite bird, which are calling my local city centre their home. After a lot of umming and ahhing, and a few failed attempts of trying to contact people, I finally brought it all together. Someone I asked for advice on how to get it going was a local person, Kate Gomez, who basically just told me to just go ahead and do it!

And I’m really glad I did. My initial thought on why to do it was after watching the birds at the cathedral for the first time last year, and it occurred to me about those that don’t know these birds are here. Just ordinary people walking past the cathedral or through the town and have little idea that these fantastic birds are soaring right over their heads. The worlds fastest animal somehow intertwined into our day to day lives, the least we can do is simply appreciate this!

By 10 o’clock there was a good gathering of about ten to twenty people gazing up onto the cathedral desperately scanning for a bird. Then there one was. The female circling around the base of one of the spires. I let out a sigh of relief but I’m not sure why because I knew these fantastic birds would perform and inspire anyone who came along. As the hour went on, numbers increased until at one point there must have been about forty people spread along The Close with their eyes fixed on the cathedral. Not only this but they were sharing small anecdotes about the pair. This included whether or not they’d seen them before, knew they were here, or wondered what the strange noise was which echoed across the town!

Some were there with lenses as long as my arm getting simply amazing shots, others had their expensive binoculars, others didn’t, and some came who were complete amateurs and wanted to see what it was all about. Also, with us standing in such a public place we had a lot of passers-by and tourists asking what we were looking at. An American tourist I spoke to was fascinated and could not believe his eyes when he watched the male bird fly over.

Everyone’s reactions were very positive, a part from the few who were a bit put off about the headless pigeon the male peregrine brought in! One man told me his friend was walking past the other day and half a pigeon nearly fell on his head! A highlight of the morning had to be when the male, who had been gone for almost an hour, flew in with the headless pigeon. He squawked whilst circling the front of the cathedral a few times then went into the nest. As he did so, we could hear the chicks squabbling inside. It was magical.

Numerous people came up to me and said they’d be back as they loved the experience. They’d been mind blown! Over the two hours we estimated 150 people came and went away with some fantastic views. All of these now having a new understanding of these incredible birds and they’ll hopefully pass this on. Who would of thought, this well known three spired Cathedral would be appreciated and enjoyed for its job mimicking a cliff face to provide these city slickers with a place to breed.

Keep an eye out for the next watch morning date!

A big thank you to The Sound Approach for the scopes too!

Over the past few weeks and months I have been observing and watching a peregrine falcon in my city centre. The bird has made its home at the Cathedral in my city centre which overlooks the city. Every evening when I have some time spare or whenever I’m making a trip down into town I’ll take my binoculars with me and take a look to see if I can spot it.

The peregrine here isn’t publicised very much but all the local people and the people that work in the area know about it. In past years they haven’t been very successful when breeding. Last year the birds were reported to have had one chick but unfortunately they found a dead bird around the grounds a few weeks after. Up until last week I only ever spotted one bird but when I visited last Sunday it was an absolute delight to see two birds!

I managed to have a chat with one of the people who work on the grounds of the cathedral and they said they found an egg shell just a few days ago which is very exciting! Unfortunately there isn’t a platform up but that hasn’t stopped them.

On Sunday, whilst walking round the cathedral, I couldn’t see it in the places where I normally see it but then I heard an awful screeching noise. As I searched the cathedral with my binoculars I found two birds. One was sitting on a ledge above the other one. This was fantastic to see and a real pleasure. As everyone down in the town got on with their shopping these two birds were presenting a different kind of drama.

I look forward to observing these birds and seeing how they get on in the next few weeks. Here’s a clip that I got.

If someone was to ask me what my favourite bird is without a doubt I’d say a peregrine falcon. They may not be as beautiful or glamorous as some other birds but their speed, ability and performance is beyond me, plus they’re a raptor.

Occasionally I see one on my evening walks after school, visiting my local patch or nature reserve. As well as this I travel to Derby Cathedral quite often and watch them there. You can watch the peregrines at Derby by clicking here.

Even though watching them at Derby is fantastic, it’s a bit of a trek for me. So when I found out a few months back that last year a pair had nested at my local cathedral I was over the moon! I kept in touch with a man who works at the cathedral and yesterday morning I had a message saying that one of the birds had been spotted there quite a lot recently.

Due to this as soon as I got home from school yesterday evening, I got changed and walked down to the cathedral. It took me about 20 minutes to walk there and as soon as I got there, I raised my binoculars and there it was sitting directly in front of me. I was so thrilled. It was quite high up so I didn’t get the best view or the best photo. However by pot luck the man I’d kept in touch with recognised me whilst I was watching the bird and we had a chat about last years chicks, when the birds around and where it normally sits. This was very interesting and hopefully, in the future, I’ll get some better photos when it isn’t sitting as high up.

I arrived at 6.30 and observed it until about 7.40, when it vanished. Even though looking up almost vertically for over an hour didn’t do my neck or back any good it was worth it! I felt so privileged to see a bird like this so close to my house and I’ll definitely be making the most of it!

Here are some photos I got. They’re not the best but at least I managed to get some! 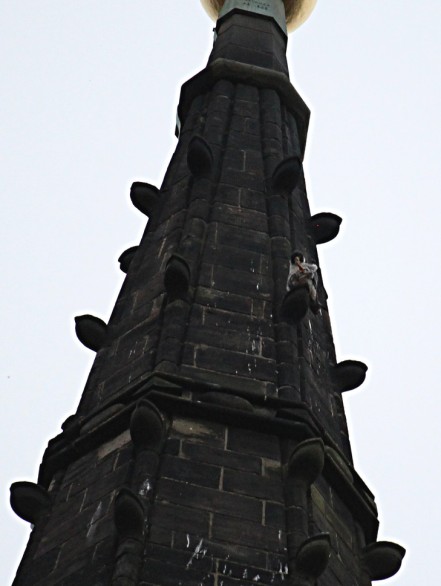 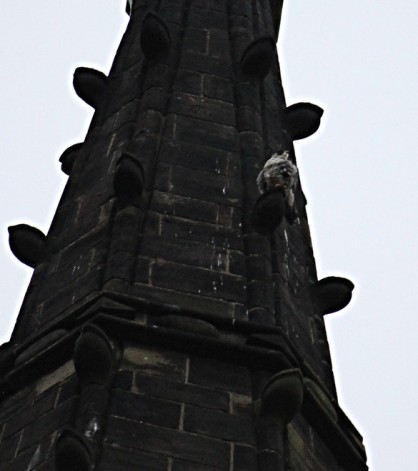 Recently I’ve been very busy with school work and a couple of other things but that hasn’t stopped me from getting out and about. One wildlife spectacular that I have been observing in my local city centre is a pied wagtail roost. In Lichfield city centre, as it gets dark, all the nearby pied wagtails group together to form a roost for the night.

Not only does this happen in my city centre or with pied wagtails but they take place everywhere and with other bird species too, like starlings. They are really worth looking out for as they are fantastic to watch. The noise they make when they’re settling down is incredible. If you watch all the individual birds closely you’ll see how they’re all trying to get their own spot, then settle down for the cold night ahead.

There are many reasons why they gather in our towns and cities like this. For example by roosting here they are less vulnerable to predators and in rural areas temperatures can be several degrees above those in the open countryside. This can be a difference between life or death to a small bird in the winter.

You’re most likely to see these roosts in the trees right outside the shops. So next time you’re in town at night or just as it’s getting dark during the cold months look up at the tress and you’ll be in for a real treat!

Here’s a video I got of the pied wagtail roost in Lichfield city centre.