At this time of the year there’s no doubt that Autumn is fully under way. Autumn is my favourite season, I always think late August/September time is the least exciting time of the year for wildlife. There’s not as much about so when Autumn approaches and the leaves start to change it’s as though it’s all coming back to life again. In my opinion anyway!

The leaves are changing and walking through my local woodland turns into an artist painting with hundreds of different colours and shades. As well as this, the badgers I film and watch are busy preparing for the winter, which is when they become less active. I normally get some great sights of them at this time and in the past the footage I’ve recorded has been very comical.

Looking to the skies and the feeders in the back garden, everything is very exciting. For example, so far in my garden the number of goldfinches has boomed. Most mornings before going out I look out and spend ten minutes or so watching the dramas as they squabble over the nyger seeds or sunflower hearts. It reminds me a lot from when I was younger, the time when one year we had literally hundreds in the garden at one time. We haven’t had that many for a few years but the sight of them is still so special.

I’ve also been starting to notice flocks of long-tailed tits on my routes, something which I find great as they’re a bird that I don’t often get in my garden.

Over the next few weeks, as the weather gets colder and we head into winter, I’ll also look forward to seeing all the winter migrants. Already I’ve heard people reporting of redwing. I also really look forward to waxwings which I imagine shouldn’t be too long now.

Here in Staffordshire I don’t live far from Cannock Chase which has a very healthy fallow deer population. At this time of the year obviously that only means one thing, rutting! Unfortunately I haven’t seen any behaviour yet this year but I look forward to in the next few weeks. Another Autumnal spectacle.

A big factor of why I decided to write this blog is because of one of my favourite Autumn activities. It consists of looking closer into the leaf litter, or perhaps on the sides of dying trees, and is of course, fungi foraying! At this time of the year when I’m either out on my patch or elsewhere I’m on high alert for nearby toadstools or bracken. My identification skills still aren’t there yet, I have a long way to go, but I enjoy learning about what I see. Not just the name but the fascinating biology behind it.

To expand my knowledge even more, yesterday morning I went on a fungi foray with my local (Lichfield) wildlife group . It took place at a woodland about 5 minutes from where I live so it’s basically one of my local patches. When I was up there just last week I noticed the number of different species I saw and also got a few photos too. However yesterday was good as you can learn so much from other peoples knowledge and so I did!

We were out for about 2 hours and saw a whole host of different fungi. From the common and typical candle snuff and coral to (at least) two different species of ink cap. At different locations you find different types, whether that be due the vegetation in the area, weather or soil type. So every time I go on a fungus foray at another location it’s very interesting to compare what I see. There was a few species that I was looking for yesterday, some of which I saw but others I didn’t, however I did see some that I hadn’t noted before. At this site a really common species was a type of honey fungi and field blewit (which is of course edible).

I didn’t get many photos but here are a few. 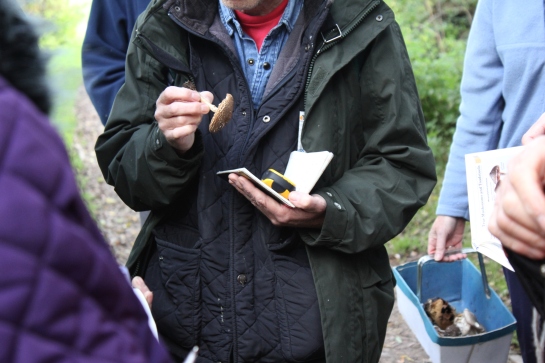 Back in November I gave my first talk at a local school which is a school for autism. After filming the wildlife in the woodland on their school premises over the summer I rounded up all of my best footage and produced a talk for the students. This was very similar to what I did today. Over the last few weeks and months I have been filming all the wildlife in the woodland on the school premises but this time I focused on species which are more active in the Spring and around the feeding station.

At the school they love the wildlife they have in the woodland. They have special lessons when the students will go out and do a variety of activities whilst being surrounded by nature and observing the wildlife around them. I’ve been told many times in the past that these kids are very tense and suffer from other illnesses like depression but when they’re out in the woods they immediately start to feel more relaxed and chilled out. This is very important for those children and it’s obvious by all of the photos I’ve seen and how they reacted to my talk that they love animals. This is mainly due to the regular lesson of going outside and the enthusiasm of some of the teachers. It makes me wonder the impact this could have on mainstream schools, undoubtedly it could be extremely beneficial.

In my talk, first of all I went through all of the birds that we filmed at the feeding station and some others which may also be found there. Then I went onto other day time visitors like the squirrels before going onto the visitors at night. With the trail cameras we were very lucky to film foxes and badgers in the woodland here which was really fantastic and really great to show the students. Overall it was a really lovely day and I really enjoyed myself. I look forward to perhaps doing another day of talks there in the future.

I would also like to share some exciting news about a photography competition I won a few weeks back. Here’s the article in my local newspaper about it  – http://www.lichfieldmercury.co.uk/Young-Friary-photographers-impress-camera-skills/story-26642578-detail/story.html

Yesterday morning I found out about proposed plans to turn one of my local patches into a quarry. I regularly visit the ancient woodland as it isn’t far from where I live. I’ve visited it for as long as I can remember, for example walking through the woods on a number of occasions and taking photos of the wonderful wildlife. I was very upset when I found out this news and decided that I wanted to do something about it.

After hours of research I decided to create an online petition as I hadn’t found any others. My petition is targeted at the local Council as they are currently discussing the plans and a verdict will be released on the 5th of December.

Along with many others Hopwas Wood, also known as Hopwas Hayes Wood, is one of my favorite outdoor spaces. It consists of approximately 385 acres of ancient woodland which date back to the doomsday book.

The area is listed by the SPNR as a large ‘primeval forest’ and ‘a good place for plants which frequent woody places’ as well as birds and insects. It is also important for a number of protected species such as otter and grass snake.

Here’s a link to the petition I have set up. I would be extremely grateful if you could sign and share – https://www.change.org/p/staffordshire-county-council-save-hopwas-wood-staffordshire